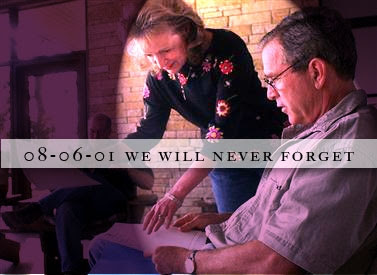 (I am participating in another of BlueGal's blog swarms.)

Six years ago today, the man the Supreme Court crowned president of the United States of America was interrupted in the midst of his extended vacation for one of those pesky presidential briefings. Good old Harriet Miers handed him this fax. What went through our Commander Sociopath's manipulative, grasping little mind as he read the following words?
Nevertheless, FBI information since that time indicates patterns of
suspicious activity in this country consistent with preparations for
hijackings or other types of attacks, including recent surveillance of
federal buildings in New York.
What went through W's mind? Was it "America will never seek a permission slip to defend the security of our people. " I mean W., Cheney, Rice, et. al., certainly did not make any attempts 6 years ago to defend the security of our people -- even asking for a permission slip at that point would have been more of an active defense than the position W's administration took.
What was that position? W and his administration were warned about a terrorist attack over a month before it occurred and they did not do one damned thing to protect the U.S. territories and her citizens. Under these circumstances, the best light in which we can view W is as a lazy leader guilty of willful homicidal negligence. Since he did absolutely nothing about this warning, and the warning the Clinton Administration gave him, and the warning French Intelligence gave to the CIA, and the warning given to the FBI by the instructor at the flight school where 2 of the hijackers were enrolled -- one might conclude that W wanted 9/11 to happen. Since the Bin Ladens were long-term friends and associates of the Bush's (W cleared one plane to help the Bin Laden family escape New York in the aftermath of 9/11) one might logically conclude that W helped plan 9/11. However, we can't precisely identify W's motivations -- that would be the equivalent of charging someone with a thought crime and I will not whip W with his own lash, lest it cause my hand to rot off. What we do know is that this memo exists and it was shown to W six years ago today.
Any government that supports, protects or harbours terrorists is complicit in the murder of the innocent and equally guilty of terrorist crimes.
George W. Bush

Wake up, America! The enemy has been killing us softly for the last seven and a half years. He fights his battle against freedom from behind his desk in the Oval Office. It is time for we, the people to cowboy up and impeach the negligent traitor.

i haven't so much wanted to be a member of a lynch mob since I saw that one in the movie 9 to 5...remember that one? Jane Fonda in a hunting outfit & the whole office is out to get Mr. Hart:
"There he is!!!"
"GET HIM!"
"Kill the BASTARD!!!"


but seriously, sign me up.
even though it's too late.
didn't i read on this very blog that the whole damn process takes 2 years???

What we really need is a good house cleaning from the top on down.
Not only does Bush and his crowd have to go, but about 90% of congress and "K" street should be wiped from the map.
We had a revolution against England, now is the time to revolt against Washington.

I loved 9 to 5. I even liked the dorky Dolly Parton song.

I don't know that the whole process takes 2 years -- I'm not sure if I agree with Infantry Dad about that. It could take to years -- but I think that just pushing the process on these guys might check their shit a bit.

Also, they passed a bunch of funky laws and riders when the Congress was Republican-dominated. For example, in case of national emergency, (equivalent of 9/11 or Katrina) the President can usurp power over all other branches for the sake of democracy.

In other words, he could DECIDE something was a national emergency and then take over as dictator-for-life. Impeachment MIGHT help prevent that.

Pelmo -- Yes, and a third party might be nice.

Hey, our not-so-famous Senator is trying to set up a public fund for candidates seeking office, in order to get rid of corporate donors. It sounded a lot like your idea. Try googling Durbin, or if I find it I'll pass it on.

Also, they passed a bunch of funky laws and riders when the Congress was Republican-dominated. For example, in case of national emergency, (equivalent of 9/11 or Katrina) the President can usurp power over all other branches for the sake of democracy.

Ummm. . .When did Bush turn into Chancellor Palpatine. Damn George Lucus and his ability to make things in Star Wars actually happen. If Jar Jar Binks shows up I'm off to Canada!

Judging by the popular candidates, it appears that corporate-sponsored Dictator II will be taking the Presidential oath in a couple of years, getting ready to orchestrate more fake chaos and fear on a public all too willing to abandon its freedom. Let's hope people decide they've had enough sooner than later.

I have been more relaxed since I gave up politics.
Being a Marxist is tough these days.

Bostick -- I know what you mean. I have to take little breaks here and there -- although I used to run with a bunch of Marxists and politics was the ONLY thing they could ever seem to talk about.

Fatrobot -- I know you will, copycat!

La Sirena - I know you will, copycat!

I tend to believe that 9/11 was allowed to happen - then shaped.

Do all these responses mean the revolution is starting.
I will get my torches and pitchfork ready. Nothing like a revolution to spice up those dog days of summer.

Damn those word verifications, because I always get the tuff ones.

Twit -- governments are gardeners
Oh, hell yeah and I concur!

Actually, my problem with most conspiracy theories is that they presume a degree of organization and far-sightedness that is way beyond most beaureaucrats/ politicians.

Obviously, government attracts opportunists. That type naturally will cultivate a situation to serve their interests. (Or, as it appears in this case, just refuse to weed.)

But what pisses me off is how some people are so easily convinced to support harmful irrelevancies when the 9/11 standard is waved -- by the very same people who were either to incompetent to prevent it or too involved or too opportunistic to stop it.

To me, hypocrisy is one of the worst qualities a human can embody.

But then, who the hell am I?

Pelmo -- Don't get ahead of yourself. First we need smelling salts to revive the masses.

Oh, and...
"The revolution will not be televised."