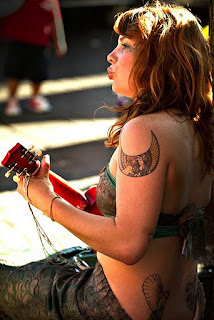 I sang at choir in the church basement tonight. Please, laugh away.
Yes, I'm a good Irish Catholic lady who practiced with fellow choir members for two and a half hours -- less a twenty minute break in which we drank wine or beer and ate hors d'ourves. (You can refill your glass at the end of break so you have sustenance for the second half of practice!)
Since I am grooving on my catholicism tonight, I shall make confession. I love singing! It's challenging fighting all of the complications of harmony (so appropros on so many levels), it is so challenging fighting all of the bullshit of organized religion -- but somehow set it to music and I feel it. So many conflicts, but goddammit -- I'm still a fucking catholic!
Excuse me, Irish Catholic.
See, that differential is significant. I don't buy into that political pope crap. I also grew up with several guys who killed themselves because they were destroyed by the tragedy of being raped by priests. I imagine one of them as a significant image in the Jungian Archetypical Heaven now. He was golden and beautiful and Michelangelo would have painted him as the Archangel Michael. And I was taught to practice catholicism by 13 years of catholic school and my Irish catholic grandma and Jesuits and a book of the saints. So really and obviously, I'm an overanalyzing, superstitious woman. But aren't those the qualities that keep religion solid, stable and historical?
The point I was trying to make a minute ago is I don't pray to Jesus or God. I think pure, unsinful beings are unapproachable (and a load of misogynistic, hallucinogenic bullshit). I am the product of faith passed on from the oppressed -- pray to your mother and your friends and family, the Blessed Mother and the saints.
And the name is also significant. I was not taught to pray to the Virgin Mary; I was taught to pray to the Blessed Mother. Recite both of those names to yourself and see who you want to call on to assist you in your petitions. Tonight I stood on a bridge that rocked over the Chicago River while singing "Gentle Woman" to a a gift of urban nature which always blesses me. Blessed Mother, thank you for your children.
And tonight I also sang with the church choir -- even "Danny Boy" (yuck) which according to the music notes was published in "Londonderry" rather than Derry. I hate "Danny Boy". Over-played and praising saccharine martyrdom to The Man.
We should sing "The Wind That Shakes the Barley". It's a more valuable theme and it relates better to the times.
"Twas hard the woeful words to frame
To break the ties that bound us.
But harder still to bare the shame
Of foreign chains around us."
Today, the foreign chains are made of different steels. In this millennium, foreign does not refer to other nations and cultures, but rather, multinational corporate persecutors. We are cuffed by different oppressors but we are all still trapped.
And now to quote a catholic from a different culture: "Better to die on your feet than live on your knees."
So let us pray.

Labels: catholicy, Chicago, love, me, mermaids, music, up on my soapbox, you

Keep practicing and you will work your way up from the basement choir to the one in the church balcony. I have heard you sing and believe, you should be up there now.

thanks for the lovely music. growing up catholic ain't no small thing. our mother all the way.

singin' in the choir is the shit!!

We grew up in an insurmountably sociopathic abusive parish. May those fathers freeze forever in the 4th round of the 9th circle of Dante's Inferno.

It was so brutal, I only referred to the suicides. What the hell?

and the catholic church is actively purging any priest who speaks out that women out to be able to become priests. the most healthy thing to do is to integrate, and that goes for all sorts of economic, religious and social circles as well. human organizations, like the nuclear family, can tolerate an astounding level of dysfunction in the name of self preservation.

one of the most reverential parts of mass for me was when my fav. aunt gloria (who got stoned before choir practice!) from up high in the balcony - would flash me the peace sign when everyone else was shakin' hands...."& also w/you"

BestHome Construction - is a leading development company, operating in the real estate market of Alanya since 2004. Starting as a real estate agency, since 2008 the main objective of the company has been construction and selling ready-to-move-in residences with the best locations possible in Alanya.

Great Post….. I read a few of your other posts.