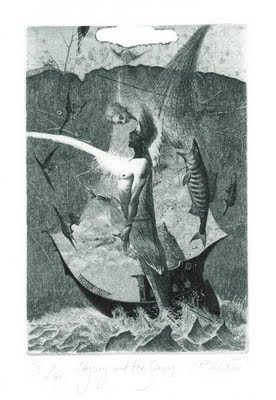 One semester I studied James Joyce. We read Dubliners, Portrait of the Artist as a Young Man, and Ulysses. I mamad with my sister and those bright boys and nights poured jack and bud over class notes singing Patsy Cline and Lynard Skynard. Thus:

That was a tuning fork the tuner had that he forgot that he now struck. A call again. That he now poised that it now throbbed. You hear? It throbbed, pure, purer, soft and softlier, its buzzing prongs. Longer in dying call.


Long death's call? Oh, singing through all logic lures the sailors to the rocks but the rocks remain. Sailors swim and bleed and minds drown in the song but these scars tissue silver and the siren sings songs not sirens and science. Silence.

river run, past Eve's and Adam's, from swerve of shore to bend of bay,bring us by a commodius vicus of recirculation back to Howth Castle and Environs.

Do you remember this?

Good link. I never came across that before but thank you for schooling me. I also fully acknowledge (now, at other points on my blog and in person) that I have never been able to get beyond the first couple pages of Finnegans Wake.I will have to try again since you clarified the title for me. It might rearrange my approach.

OK, I just corrected the title. Thanks again.