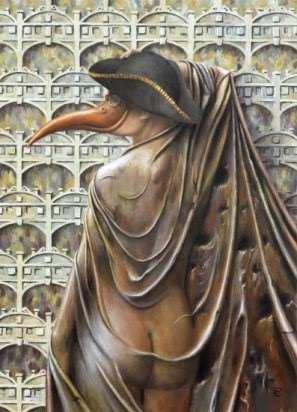 The equinox is almost here and my body is conspiring to get knocked up on me again, as it does every year when dark and day share nicely. Sharing perpetuates itself in its selfishness.

St. Patrick was a sharer in another way -- well, first he was a slave and then a priest and then an orator. He christianized the Irish (an act which may be blasphemous) but also convinced them to abolish slavery 1000 years before Columbus dug the Middle Passage. So that probably mitigates any personal gripes I might have with monotheism and organized religion. But still, Christianity in general and Catholicism in particular are such BDSM institutions like heroic (modern Western) medicine. This post pretty much seems to be about me opening the assault rifles on any institution I'm supposed to have surrendered to or am currently selfishly sharing with -- so you may want to look away quickly. And recently a friend of mine said it's always combat with me. That must suck, knowing me like that. My presence is never restful or soothing, unless you're an infant or going through a bout of psychosis. I can rock colicy babies to sleep on my knee and I can calm someone experiencing active psychosis. I could describe the steps I take in both of these cases, but it probably wouldn't make a logical pattern -- it's more like when your physics professor tries to teach you calculus or engaging your lover in combat. On second thought, it's nothing like that.

I don't like myself at all today and I'm also thinking one million pornographic thoughts. So maybe ego stroking and self-loathing are an expression of selfish sharing which is quite likely the driving procreational force in humanity.

During finger therapy all of the OTs cryptically discuss amongst themselves how snappy and cruel one surgeon can be. Personally, I find him to be very compassionate and kind of sexy. But I don't work for him, either. Of course today, a second-tier somebody else mentioned in a whisper that Dr. That Guy just really needs to get some. But once you start speculating about what someone else is getting, it might mean that you aren't getting enough either -- or maybe you just want to be the one to give it to them.

Doesn't everybody get turned on by cruelty at some really basic, reptile brain level? And truthfully, all of us guilt-ridden girls just get juiced-up love panties for doctors. We want to marry them and sue them and do what they tell us and then blow them in their exam rooms or maybe we just love surgeons in self-defense because there they are convincing us to let them pierce us to the bone even though it hurts and costs and scars. We let them tie us to the table and slice apart our skin and maybe knock us out and maybe keep us awake -- completely at their discretion and we never, ever question the choice, really. We just surrender.

But then we catholic girls are fed guilt and surrender on toast from baptism and we're told to die virgins like St. Maria Goretti or second best, surrender to the yoke of holy matrimony and pop out lotsa babies in 10 month intervals so there will be more catholics and consequently we have lots of weird sex & worthiness issues because the only ones really enjoying sex in our religion are the child-raping priests since only they can absolve sin which came to earth via Eve, etc.

Probably all of that crazy Catholic sex between Yahweh & Mary (not Joseph) and St. John Bosco 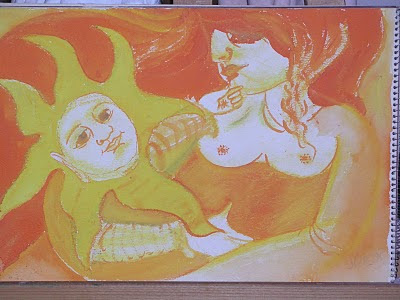 & the oratory boys and even Adam & Eve actually happened on the Equinox which can never be a birthday but is often a conception date which is why the pope tells you life begins at conception but we girls know it doesn’t really count until it comes out like the sun, so really its solstice you’re waiting for, Holy Father, you just didn’t notice because of all of that blinding sunshine.

(The top image is a painting called Lady Doctor by John Woodwark. The Birth of the Sun King is by Hetty MacLise. I found it on her blog.)

Particularly telling on doctors, on cruelty.

I suppose your presences is rather grating. Yes, yes it is.

My daughter is making her communion and memories that I don't want there are popping up. I can't stand it.

Reminds me of a priest, shot in the ass by a small pellet, who gouges it out with a machete, then disembowels HIMSELF and devours his guts before succombing to his extreme act of autophagia. Sounds complicated? That, my friend is what Christianity is all about. (Well, not all perhaps). OK, I may have exagerrated just slightly, and lied about my age a couple of times, but I never hurt a kid, OK????!!!
I'm fucking glad that I'm an atheist. Shows you can't always believe what you read in the Bible I mean.
I do not mean to offend, I will, however, fight christianity to my grave.
Seriously, Jen, your prose is to die for. I find it effective and fit for purpose. I am thinking of finding the right kind of energy too and a bit more motivation.
Go for it Jen!

I was talking to my mother on the phone today and she told me my blog is very scary lately. So thank you, gentlemen, for the compliments and also the complements.

Jack -- Ditto what I wrote you on facebook. Go reread it. please...

You don't offend me, Zoro. I can't explain what I am but it isn't christian.

I'm in a weird creative space right now. I just came home from a weekend in the woods with 3 paper towels full of prose impressions and memories of the greatest, most terribly beautiful burgers.

you weave insights through your cathardic writing so well...never soothing, unless you're an infant or you're going thru a bout of psychosis...surrender on toast... and love panties.

I dug that little erogenous zone expiring at the ras le bol of your comment Ed. This doesn't make me a sophist, but it makes you a writer!